Guide to Planning my Retirement 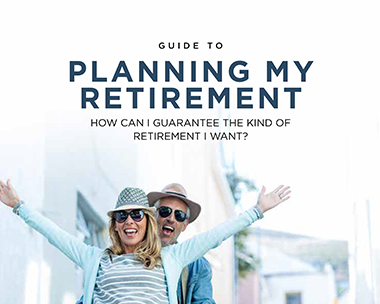 How can I guarantee the kind of retirement I want?

Are you ‘mid or late career’ or planning to retire within ten years? If the answer’s ‘yes’, then you probably want to know the answers to these questions: ’Will I be able to retire when I want to? Will I run out of money? How can I guarantee the kind of retirement I want?’

A better tomorrow starts with understanding today. When the future is unclear, the thought of retirement may well feel more daunting than exciting. Our retirement planning service can help you build the wealth you need to achieve the retirement you deserve.

Few people can visualise their retirement, but most would hope, at the very least, that it is a comfortable one. And we all know that, to achieve this goal, we have to have our finances in place as early as possible.

It’s never too early to start planning for your future. When planning for retirement, the truth is that the earlier you start saving and investing, the better off you’ll be, thanks to the power of your money compounding over time. It’s like a snowball: the further up the mountain it rolls down from, the more snow it picks up, and the bigger the snowball is by the time it reaches the bottom. Put simply, this is what happens to your money.

If you’re concerned about saving enough money for retirement, you’re not alone. Even if you began saving late or have yet to begin, it’s important to know that you are not alone, and we can discuss with you how you can increase your retirement savings. There are steps that you can take to improve your pension prospects, no matter what your age.

We can help you determine which retirement income methods may be best for you based on your personal needs and goals. These are some basics you need to know.

Both the basic and single-tier State Pension are protected by something called the ‘triple- lock’ guarantee. This means that they rise each year by the greater of annual CPI inflation (announced in September every year), average earnings growth or 2.5%.

From April 2019, the State Pension increased by average earnings growth, which came in highest at 2.6%. If you’re entitled to the full new single-tier State Pension, your weekly payments in the current tax year are £168.60 a week – for this, you’ll need to have 35 years of NI contributions.

The State Pension is unlikely to provide a substantial income in retirement. That’s where a private pension can make a big difference.

The Government encourages you to save for your retirement by giving you tax relief on pension contributions. Tax relief has the effect of reducing your tax bill and/or increasing your pension fund. However, at the time of writing this guide, the way pension tax relief works is reportedly under review by the Treasury.

The Welsh Government now has the power to set Income Tax rates and bands from 6 April 2019, but has opted to keep these the same as England and Northern Ireland for  tax year 2019/20.

Your annual allowance is the most you can save in your pension pots in a tax year (6 April to 5 April) before you have to pay tax. You’ll only pay tax if you go above the annual allowance – this is £40,000 this tax year.

If you go over your annual allowance, either you or your pension provider must pay the tax. HMRC does not tax anyone for going over their annual allowance in a tax year if they retired and took all their pension pots because of serious ill health or have died.

If you die before taking your pension, HMRC will bill the person who inherits your pension for the tax. The rate of tax you pay on pension savings above your lifetime allowance depends on how the money is paid to you – the rate is 55% if you receive it as a lump sum and 25% if you receive it any other way (for example, through pension payments or cash withdrawals).

You may also have a reduced lifetime allowance if you have the right to take your pension before the age of 50 under a pension scheme you joined before 2006.